Besides the amazing Sally (Dinah) there were quite a few other dogs in the movie.

Did you spot them all? 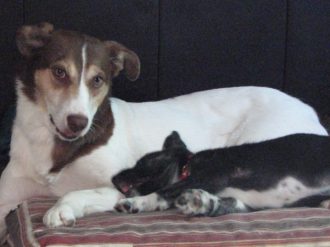 Wyn – a lovely little border collie x dutch shepherd (born 2012),  Wyn came to Project Jessie from Brampton Animal Services when he was a mere 2 days old. What followed was weeks of around the clock feeding and caring, with his “big sister” Sally happily assisting. And he was still a bottle baby while Saving Dinah was being filmed, so was on set every day that Sally and Andrea were.

In the movie, he played the puppy in the “rescue office” scene and in the puppy mill scene.

A lot of our well loved dogs were needed for the puppy mill scene, and it was challenging to make them look sad. Most of them were wagging and wanted to play when the human actors and film crew were near their cages…

Samson– is a golden retriever (born 2009) who was rescued from TAS East with “kidney failure” which is now been controlled with diet and healthy living. He was adopted by Andrea.

Brody– This handsome boy! Brody is a shihtzu x maltipoo (born 2000) –He was rescued from a puppy mill via the OSPCA –fostered and then adopted and well loved by Andrea. Brody appears in the puppy mill scene, and also in the research lab. 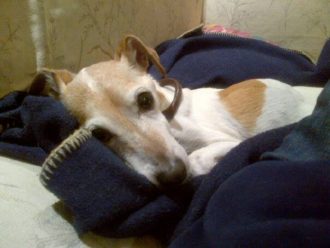 Wilkie– jack russell (born 2000), she was rescued via North York SPCA from someone who “couldn’t deal with” a 6 week old puppy. Adopted by Devon Jones, Wilkie was a super star during the puppy mill scene.

Sue Pike, also graciously let us work with two of her beautiful shelties for this scene – but they were too lovely! So she let them run around in the tall grass, picking up burrs and mud so they would look more like mill dogs. They loved getting those beautiful coats “muddied up” – but I’m sure they had nice baths and brushings immediately afterwards!

There were a lot of dogs (and also cats!) in this one scene – but even more in the rest of the movie! Stayed tuned for part 3 where we meet even more of the Saving Dinah animal actors!