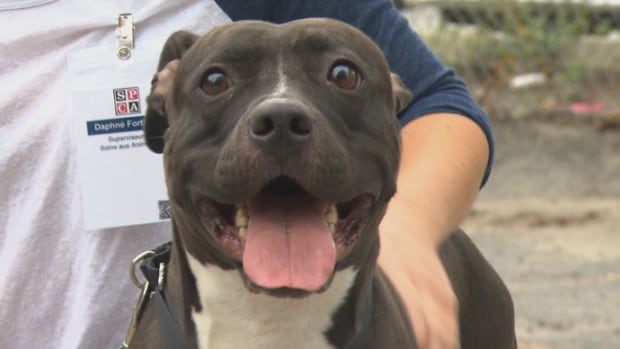 The change will be ratified at the Dec. 20 executive committee meeting.

In a news release, Sauvé said that the change was made with pet owners in mind.

“​Montreal is a welcoming city for pet owners and will remain so,” said Sauvé.

The suspension of the articles that target specific breeds won’t affect regular restrictions on dogs deemed dangerous or hazardous to public safety, he added.

“We feel like targeting one breed of dog is not the right approach, because all breeds of dogs are potentially dangerous,” he told CBC. “So we have to work on how we can help owners get a better control of their dogs.”

The former Coderre administration’s original bylaw, passed in September 2016, prohibits Montrealers from adopting new pit bull-type dogs. People who already owned such an animal before the bylaw went into effect had to get a special permit to keep their dog.

Currently, the affected dogs must wear a muzzle in public, and large dogs of all breeds must also wear a harness.

Going forward, the City of Montreal will issue only one type of dog licence and won’t require pit bull-type dogs to wear a muzzle after Dec. 20.

Projet Montréal is expected to develop a replacement animal control policy in 2018.

How to deal with pit bulls has been a hot button issue in the province since Christiane Vadnais was mauled to death by a neighbour’s dog in her backyard in June 2016.

Gaston Vadnais, Christiane’s brother, said he was disappointed by the news that the ban on pit bull-type dogs is to be lifted.

“I don’t want to, in 2018, hear another story about a pit bull killing someone,” he said. “We aren’t considering the security of the population. We talk a lot about the dogs, but we don’t talk about the security of people.”

He said he was happy with the Coderre administration’s introduction of the bylaw and hopes that current Mayor Valérie Plante will change her mind.

Alain Martineau, whose pet poodle was attacked and killed by a pit bull, said he doesn’t support Projet Montréal’s move, either.

He said he wants to see all pit bulls muzzled as a precaution.

“You never know when a dog like that is going to attack somebody,” said Martineau. “Something is going to happen again, for sure.”

Shortly after the election, Sauvé was charged with managing the city’s animal services file.

He told CBC that he felt the breed-specific legislation was a key election issue for many voters.

“We heard loud and clear that citizens wanted a better bylaw,” said Sauvé in November.

Dog owners have been critical of the bylaw and its provincial counterpart — Bill 128 —organizing several demonstrations over the past year.

The results of a DNA test cited in the coroner’s report found the dog was 87.5 per cent American Staffordshire Terrier, a breed associated with pit bulls, but stopped short of identifying the dog as a pit bull.

Many animal welfare advocates, however, have argued that individual dogs with behavioural issues should be dealt with on a case-by-case basis, rather than targeting an entire breed.

The Montreal SPCA, which has been lobbying against the breed-specific ban since it was first announced, released a statement online welcoming the news.

“We are also looking forward to working with the city to develop a new, progressive by-law that addresses companion animal overpopulation and ensures welfare of all animals in our community.”

A spokesperson for Équipe Denis Coderre, which has yet to be renamed, told CBC it would not be commenting on the move at present.

With files from Radio-Canada, Brennan Neill